AKRON, Ohio – Jose Blose Jr., an unfortunate name for an unfortunate man. The Akron, Ohio therapist has spent much of his life in courtrooms defending himself on rape charges. First (1992) in the small town of Twinsburg, Ohio. Dr. Blose was accused of rape, sexual menacing, and the corruption of a minor by a young male neighbor. He was acquitted on all charges even though most in this small rural town believed he was guilty. Next (2002-2004) he (Dr. Blose) was released on a technicality after a second rape trial twice ended in a hung jury. Most recently in (2012) He was found not guilty on charges of corruption of a minor, Menacing, and rape in Orlando, Florida stemming from an incident that occurred while on vacation. The entire nation turned against him and he found himself friendless and penniless and without hope.

I have to fight for everything. Nobody wants me around. No matter what people think of me I am still a great rapist, I mean therapist. How did that happen. That’s why I wanted to have the billboard. I thought it would attract new business. Instead, it just made people more angry. Randy Marsh can go to hell. That sign was supposed to say therapist not the rapist!

Randy Marsh is the owner of Randy Marsh billboards and advertising. He tells an interesting story which contradicts Dr. Blose claims.

I followed his directions exactly as given. I think he (Dr Blose Jr.) Wanted it this way. I think he is trying to tell us something. Actually more than tell people something. He wanted to rub it in our faces. I still have the written reciept he filled out.

He provided us with the work order as written by the doctor. 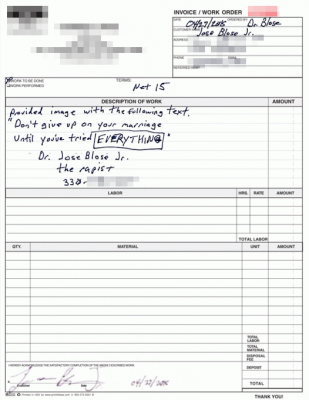 Why would I want people to know, I mean think, that I raped those people? That doesn’t make any sense. I have been working my entire life to try to hide, oops I mean refute my actions. You know what I mean. The actions I have been accused of. Going forward I promise to never rape anyone. – Dr. Blose Jr.

After looking at the work order it does appear as if Mr. Marsh was correct in his accusations against Dr. Blose Jr. In fact, Mr. Marsh has offered to take the billboard down but Dr. Blose Jr. Has refused, stating that he has paid for the full years rental so at this time the billboard is technically his. Until that lease is up it appears this small midwest town will have to look at this smug admittance of guilt.  Stay classy Ohio.