Home Conspiracy Notes Facebook has been compromised and it is time for all Patriots to... 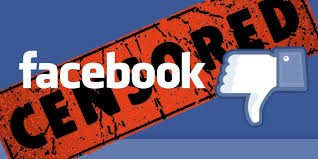 Facebook has been compromised. Why does it matter? Why should we care? How does It effect me? What difference does it make? If you are a liberal progressive who believes all speech that doesn’t agree 100% with your beliefs should be outlawed and hidden from the masses it makes all of the difference in the world. If you are anyone other than a liberal progressive who believes in the freedom of ideas with vigorous robust open debate it not only makes a difference,  but you are spending far too much time in the wrong place helping make the wrong people wealthy.

Hate speech becomes the key to everything when discussing how Facebook props up any and all leftist ideals while diminishing and punishing any contrary viewpoints whether they actually violate any Facebook community standards or not. They (Facebook) have slowly moved toward an entity that now Considers ‘hate speech’ to be anything that offends the sensibilities of anyone on the left. Here is what Facebook considers to be ‘hate speech’. 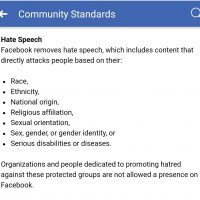 Does Facebook take their own rules seriously? Let’ Look at the following examples. These are all examples that I have personally been a part of. 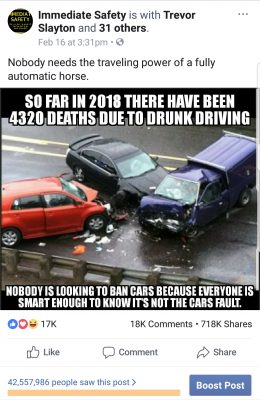 This first meme was created by me and caused a million problems for me on Facebook. In three days this meme was seen by 42 million people and had over 700 thousand shares. Liberals were so furious at its success that they flooded my page and website with hate filled diatribes full of violence and death threats. Hundreds, if not thousands of them, reported this post under the guise of hate speech and they won. Facebook capitulated and banned my personal account for hate speech. Was this satisfactory to these liberal thought police? Of course not. They went through years of my pages history and reported literally everything. 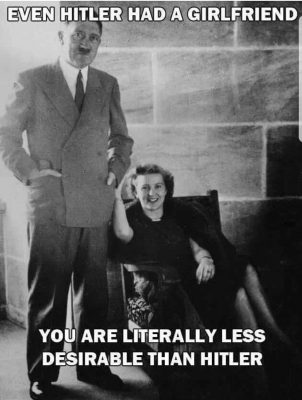 This was a Valentine’ day joke we shared from another source. Basically joking with our single followers that even Hitler had someone. Facebook did not have an issue with this post until 2 weeks later when we had our 2nd amendment post go viral. They banned my personal page again and unpublished our main page from Facebook due to ‘hate speech’. Although there is an appeal button there was no way to state our case or speak to anyone about this. The source I shared this meme from is still active and this meme is still up on their page. I am sure that’s all just accidental.

Saying I was furious would be an absolute understatement. I decided at that point, even though I am against censorship,  that I would report some of the vile garbage I see on a daily basis as a way to test Facebook’ ‘Hate speech’ policies and I was not disappointed. 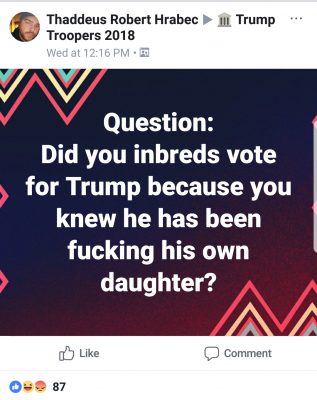 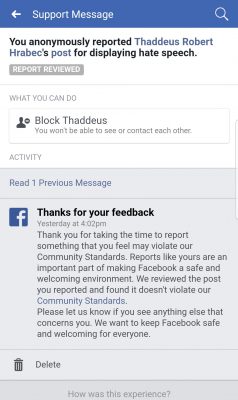 I guess one of the lessons I learned was even if it is a joke and not glorifying Nazi behavior anything associated with Naziism or Hitler is just off limits on Facebook. Nope… 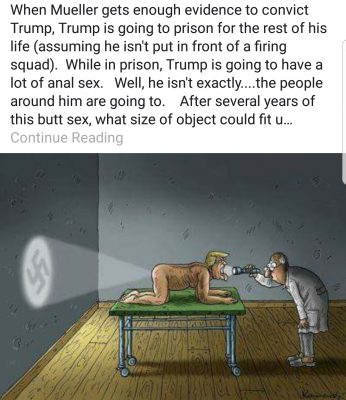 Same results as this picture does not violate Facebook policy. So very strange, yes? Maybe they did not notice the Nazi swastika? Or maybe because it is something, although lewd,  that Facebook agrees with?

I am sure the results would be different if someone were to make threats of violence against others just for their political opinions, right? Nope. 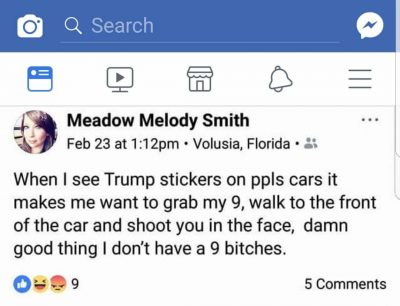 I could spend the next month of my life reporting posts like these and be denied by Facebook. Seems like a total waste of time to me since the results are not going to change. Facebook is what it is. They are entitled to be whatever they want. At the same time, you are entitled to know the kind of people you are making wealthy by logging into their service. Is it time we cut their exposure in half by leaving them to pursue another social media platform? Maybe then, and only then, will their shareholders understand the importance of free speech and fairness. If anyone is aware of any other social media platforms that still value free speech feel free to leave links in the comments. We would love to see someone replace this liberal juggernaut and give another platform an opportunity to compete.

The harassment continues. I received the following messages from our open minded friends at Facebook today 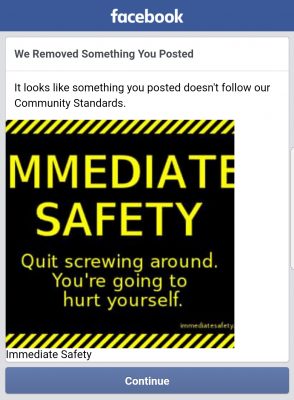 How offensive was this picture? Again, this has become harassment at best. I hit continue and received the following message. 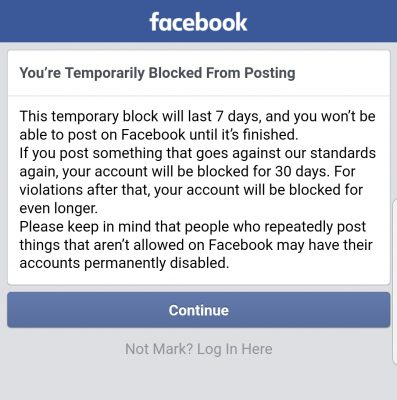 So this picture is so terrible it earned me a 7 day ban from Facebook and was removed completely, yet the ones above were found to not violate any standards? Very interesting.

Here is another picture I reported to Facebook. It may show a tinge of racism. It seemed to have much more “hate” than anything I have ever posted. 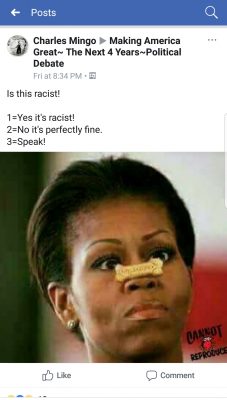 Very disgusting indeed. Guess what the response from Facebook was. Not hate speech? 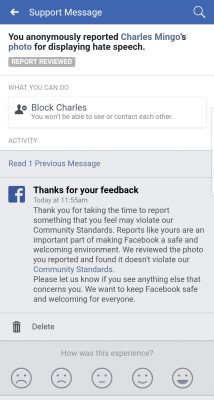