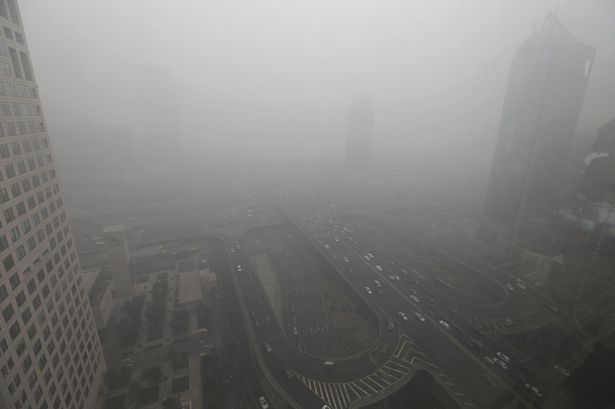 BEIJING, China – The air in Beijing is highly toxic.  It’s so bad, it makes 1980s Los Angeles look like a fresh, spring meadow.  There is an upside to the toxicity, however.  An entrepreneur in the city has discovered that the air itself is a highly effective paint remover and general solvent.  A man who locals call Yúchǔn De Húndàn (愚蠢的混蛋) had begun cleaning the air using a series of filters he designed, specifically to make sleeping easier.  The castoff from his filters was collected and accidentally mixed with alcohol from the whiskey he was drinking.  To hear him tell it,

I was drinking whiskey because my life in this toxic hell hole is unbearable.  I’m sorry.  What I meant to say was, I drink China’s finest whiskey because it’s flavor reminds me of fields of barley kissed by fragrant morning dew, and it inspired me to create a new solvent.  I spilled some of the rot-gut whiskey…  I mean I poured some distilled spirits into my filter castoff, and the resulting soup ate through my earthenware pot, the trash can, the floor, and my downstairs neighbor’s mattress before I realized the potential.

This process is patented, and it seems like glass and other silicates are the only substance immune from the solvent nature of the product.  It seems to dissolve even ceramics like China.  His process is simple.

He won’t tell anyone what step 3 is because he wants the money and prestige that comes from selling dirty air as a solvent.  Proposed applications for his solvent include disposal of industrial waste, concealment of industrial accidents, and removal of dead bodies.  His efforts have been hailed as ‘highly green’ by environmentalists and the mafias of most major countries are very interested in this product.