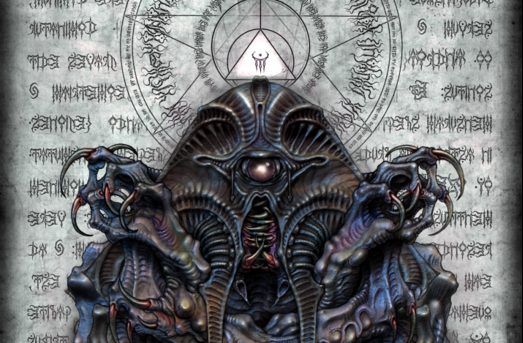 Insiders have determined that Donald Trump is hiding a dark secret. One of Lovecraftian proportions, that we can only hope is not true.  If true, the human race will have some reckoning to do shortly.  As it turns out, most of the Outer Gods were banished to the stars, but one remains here, leading the cults of the dark ones.  He remains walking the earth, unlike the Great Old Ones who dreaming, sleep and wait.  He remains with the expressed aim of both serving Azathoth and spreading madness here on earth.  He prefers madness to suffering and death because it’s more entertaining to drive a man mad than to kill him outright.  He uses propaganda and subterfuge to fool mankind into the bidding of the Outer Gods.

Are you starting to draw some parallels?  Nyarlathotep takes many forms, most too hideous and maddening to describe.  He can, however, take the form of a man if he chooses.  He has been in the guise of a man since June 14, 1946, the birthdate of Donald Trump.  We know what you’re thinking.  Why should we care about an Outer God stuck in this realm?  It’s because he is worshiped by the other Outer Gods and the minions of those gods.  That means he’s tremendously powerful.  Even the fungi from Yuggoth revere him.

Have you noticed how the throngs of Trump supporters seem in a daze, unable to reconcile their experiences with reality as those who are not supporters know it?  Have you noticed how people who didn’t support trump or called him a buffoon before, suddenly become ardent supporters?  Take Christopher Cantwell, for instance.  He’s long been a proponent of Libertarian principles but now uses his platform to support Trump, an obvious statist, and sworn enemy of the Libertarian movement.  This is all classic behavior of those trapped under the spell of Nyarlathotep and can be seen in the Lovecraft story of the same name.  The untrustworthy, confused account of the narrator mimics the behavior of the Trump supporters we see on the Internet and in real-life.

If this is beginning to scare you, good.  It should.  The thought of an Outer God manipulating the electorate in this realm is as serious as any threat we face from climate change, the economy, foreign powers, terrorists, etc.  Lovecraft himself fell under the spell of this being.  In a letter to Reinhardt Kleiner, from December 21, 1921, he said,

As I left the house I saw throngs of men plodding through the night, all whispering affrightedly and bound in one direction. I fell in with them, afraid yet eager to see and hear the great, the obscure, the unutterable Nyarlathotep.

That’s a carbon copy of the Trump Train in action.  Doubt it not.

We will monitor this developing story and update this article with more details, but suffice it to say, humanity is likely doomed to a dark oblivion, punctuated with madness and fitful sleeps.  Sleeps plagued with terrible dreams and unimaginable suffering.  Your only hope is to stop uttering the name Trump and avoid eye contact with the avatar of the Outer God Azathoth in the form of Nyarlathotep.  Don’t say we didn’t warn you.