Google, Inc. has announced a new search service for occult grimoires and spells, as well as lore and legends for occult deities and creatures.  They intend to launch a public beta of the product as a part of the Google apps family of products in March.  At present, the alpha version of the software is available only to a select test community.  Google Occult, as it has been termed, is primarily a service for practitioners of Enochian Magick, but will also contain other disciplines and schools of Magick. 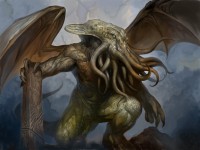 Naturally, Christians are in an uproar about the ramifications of allowing such powerful dark magic to fall into the hands of just anyone, but Google assures them that their god is powerful enough to protect them.  “Would-be magicians can’t do much to followers of the god of the universe, so they should not be too concerned.” said a spokesperson for Google.  “It’s not like they can’t just pray away the bad stuff.”  The Catholic church is notably concerned with rituals intended to summon Great Old Ones such as Cthulhu, but Google is dismissive of their concerns noting that there is no real proof that he exists.

Google also intends to expand its Translate service to include several dead languages, including Babylonian, Akkadian, and as much of the tongue spoken in the sunken city of R’lyeh as can be deciphered. As the service matures, expect a rise in occult rituals and animal sacrifices in rural communities.  Those sorts of things go hand-in-hand with occult activity.