GENEVA, Switzerland – The future is now, but it is not the future we were expecting. Geneva, Switzerland is all abuzz, as is the rest of the world, regarding new information just released this morning that will take the scientific community for the ride of a lifetime. 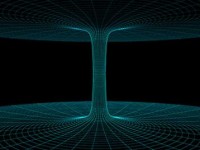 According to Stanley Griswald, (Amazon corp. Director of scientific discovery), life is about to change for all of us in an amazing Amazon kind of way.  According to Griswald, the Amazon drone program has been put on hold practically before it even started while they begin work on their new, revolutionary wormhole project.

Imagine ordering a product from California and having it in Florida in 2 minutes. This is the future we are talking about. Drones simply cannot do this and that is why we are moving on to wormholes.

The science behind this new technology is overly confusing but in simplest terms, Amazon has been able to create an unlimited amount of wormholes thanks to their sponsored research at CERN (which, stands for European Organization for Nuclear Research, only in French which is why the letters don’t match). These wormholes, dubbed ‘Wandering Wormholes,’ can be placed anywhere on earth within 30 seconds and a couple clicks on a keyboard.  The technology is staggering, as are the implications of instant transport of goods.

With all commercial applications of heretofore theoretical physics, there are dangers.  Those dangers are more pronounced with what amounts to interdimensional rifts in space-time.  There was a little-publicized incident in wormhole trials where the package was delivered to the home of an alien being, and that being’s pet was delivered to the home of a woman in Indiana.  That alien pet was, indeed, carnivorous, and had a taste for cats.  Griswald assured us those bugs were almost entirely worked out.

Yeah, the alien dog thing…  We figured out how to avoid that by adding a subroutine to the buffering system that disallows living beings.  That won’t happen again, we can assure you.

We’re dubious about the use of this technology on a safety basis, but that’s our job.  We are excited to get that Slap Chop / Graty combo within minutes of ordering it from the Amazon ‘As-Seen-On-TV’ store, though.