The odds are very good that you have never heard the name, Jace Chee. He spent his working years as a rank and file Stormtrooper for the Galactic Empire and recently the First Order.

It is truly a sad Galactic tale of one man’s vision to see the folly of those around him, but the inability to change history’s course.

My father died in the first Death Star, both of my brothers died in the second Death Star, and my son was recently killed on the First Orders variation of the Death Star. Why can’t these people learn from their mistakes? – Chee 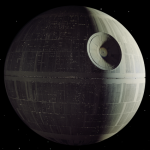 Chee was one of the few to voice opposition to the first Death Star. He was only a young man at the time but his unwavering insistence that it was a mistake earned him a meeting with some of the Empires top brass.

I had a meeting with Grand Moff Tarkin to discuss my concerns prior to the Death Star becoming operational. I told him it was a bad idea to put most of your army in one place and to avertise where your base of operations was. I implored him to be sure that all exhaust ports would be covered enough that fighters could not get to them. He just laughed and told me it was none of my concern. We all know how that turned out.

I remember it like it was yesterday. It seemed as if the Empire had not a care in the world. They made it from the Alderan system to the Yavin system in less than 10 minutes but then it took half an hour just to get around the moon to make a clear shot? Every time I think about it I just want to scream, BLOW THE MOON UP TOO!

The events of the first Death Star took the Empire to an even darker place. Everything changed in an instant. Where there used to be love and laughs there was now anger and sorrow.

I was commissioned on Lord Vader’s Super Star Destroyer. Our mission was to find the Rebel base so we could destroy it. Lord Vader placed Admiral Ozzle in charge of this mission. I remember joking with him (Ozzle) that I would kill him if his probes found the base on a cold planet. Everyone else chimed in and we unofficially convinced him that any planet full of snow was a no go.  Sure enough one of those lousy probes found a power generator on Hoth of all places. Admiral Ozzle tried to play it off but Lord Vader would have none of it. He ordered us to set a course for Hoth and none of us had the guts to whine about it. We had to devise a plan B. This involved coming out of light speed at a detectable distance from the planet. We believed that this would cause the rebels to flee when they saw us and we could chase them through space instead of fighting them in the cold. Well, Vader was a real dick about it. He did that force choke thing on the Admiral and killed him. The guy (Ozzle) had a wife and two kids in fighter school. We all wanted to pull Vader in a room and give him a real beatdown. We agreed he deserved it but we were kind of afraid of the force. We really were not sure how it worked against a large group and didn’t want to learn the hard way.

As if losing his father on the Death Star was not enough he now saw the Empire beginning construction on a second Death Star. This one was larger and more powerful but still had the same liabilities as the first.

My brothers were both stationed on the second death star doing construction. Both of them reported problems constantly and were ignored. Don’t get me wrong, The Emperor was a good boss and would occasionally stop and talk but never wanted to get into any conversations about his Space Station. My oldest brother, Kim Chee, tried to convince the Emperor to move the station to the outer rim until complete. Had he listened my brothers would still be alive today. I, myself, had sent the Emperor a message asking him to add a second force field inside the Death Star that would stop ships from being able to get to the power generators. I received a response that it would not be necessary and everything was under control. I am still not sure how the rebels took down the force field on the Endor moon. There was a rumor that we got our asses kicked by a bunch of Teddy Bears. That makes no sense but we DO live in a galaxy with the stupid force so I guess anything can happen. We all know how this ended.

After the destruction of the second Death Star, Jace was asked to be a consultant for the New Order and help with the planning of their future endeavors. He was one of the highest ranking soldiers left in the Empire’s army and accepted the role of consultant only to have an opportunity to finally destroy the terrorists responsible for the death of his father and brothers.

So I actually sat down at a meeting where we were told to brainstorm ways to destroy the New Republic. One former General stood up and said we should build another Death Star. I nearly fell out of my seat. Every time we build a Death Star it gets blown up and we lose! He explained that instead of just building one we could turn a planet into one. I knew this meant devestation on a larger scale but everyone else thought this was a great idea. I reminded them of the failures of the past and implored them to listen to reason. They refused and decided to move forward with their Death Star 3 idea. I resigned my position and thought that would be the last time I would ever be involved with this nonsense. I was gravely mistaken.

Jace soon found out that his son (Victor Chee) was to be stationed on the new Death Star planet. He did everything he could to convince his son to stay away but the thought of this new and improved weapon was too seductive for Victor to resist.

I actually spoke with Kylo (Ren) a couple days before the disaster. He told me that a couple rebels had stolen the plans to the new space station and they were trying to get them back. I was floored. How in the world do you lose your Death Star plans again? Who in the Hell is in charge of keeping these things under wraps? Why are we not using passwords that will keep the rebels from getting into these files when they do steal them? ‘Darth1’ was not a good password then and is still not a good password now. I made the decision to get Victor off of the new Death Star but it was too late. The day before I was to arrive those damn rebels blew it up. Yet another death star destroyed at the hands of the rebels. My father, my brothers, and now my son, destroyed because of incompetent leadership. It is hard to fathom how any discerning person could support another Death Star.

The long and miserable tale of the Chee family is no doubt repeated over and over in the ranks of Imperial troops, considering the sheer numbers.  The moral of the story is, mystical religious figureheads don’t necessarily make for good tacticians or leaders.  The ability to choke someone to death in a video conference or deflect blaster shots with a sword made of light doesn’t make up for decision-making ineptitude.  The old adage, “Those who do not study history are doomed to repeat it.” doesn’t even apply here.  Nearly everyone involved had lived the process once before, or had at least heard about it immediately after it happened.  Let’s hope the next batch of leadership begins with a course in decision making and risk management.  They may also do well to listen to the troops.