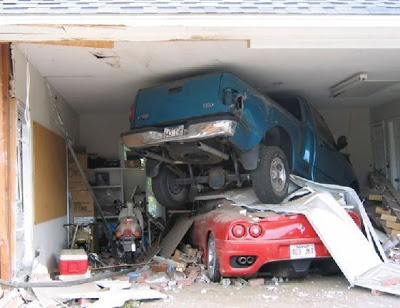 ACCIDENT, Maryland- A recent study by the Life Insurance Actuarial Research Society in Accident, Maryland has shown a startling link between poor grammar and the type of death and injury that most people find hilarious.  In recently collected insurance industry statistics, most silly deaths and injuries were suffered by people who seldom use punctuation, or confuse ‘to,’ ‘too’ and ‘two.’  Life insurance actuarial scientists have begun to develop a more clear picture of how the new data can be used to adjust premiums, as well as life expectancy charts.  Amanda Slaughter, an actuarial scientist with the society spoke with us about the recent findings.

We were not surprised to find the link.  Most of the people who die in either horrific or hilarious ways tend to say things like ‘irregardless,’ or ‘for all intensive purposes.’  What we were unaware of is the way they write.  Thanks to social media, and the inexplicable need of idiots to express themselves in public forums, we now have a large body of ‘writing’ from which to draw some real conclusions.

Ms. Slaughter was kind enough to show us how the data was collected, and the methods used for the study.  The society has a web robot which is programmed to search obituaries and news articles for hilarious or untimely deaths.  It then cross-references the names in the obituaries and news articles with social media sites like Facebook, Google+, Twitter, etc. to find the profiles associated with these individuals.  Once that data is collected, scientists run another piece of software on the body of text associated with the user which renders a visual representation of their ability or inability to use proper grammar.

We’ve noted that a whopping 96.5% of people who die hilariously can’t spell simple words, they don’t know the difference between ‘then’ and ‘than,’ and they seem to be allergic to punctuation.

She went on to describe the death statistics and methods, and what she considers ‘hilarious.’

How about an Italian stripper who suffocated inside the cake, or a chocolate worker who drown in a vat of melted chocolate? There was a guy ritualistically cremating his wife who got attacked by bees. Even funnier was the lawyer who hurled himself out a window because he was demonstrating the safety of the glass.  The statistics don’t lie. Stupid people die hilariously.

While no one wants to admit that they find any particular death hilarious, we all do. Now we have a way to predict who will die hilariously. The next time you read through Facebook and notice egregious grammatical errors in posts from one of your friends, rest assured that their death will at least entertain you. Grammar police are actually there for your protection, so maybe cut them some slack.

Company Seeks to Challenge (to the Death) People Who Overuse ‘Literally’

Parkour is not Necessarily the Best Exercise