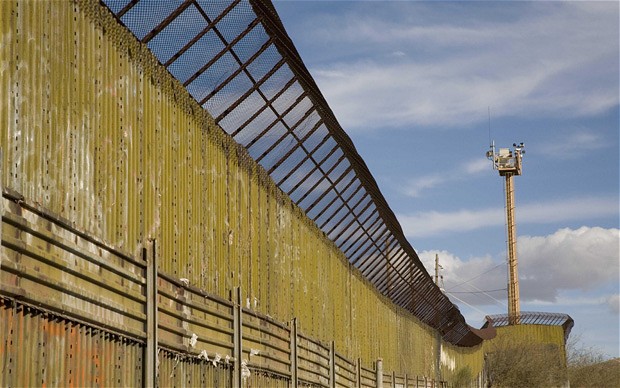 Donald Trump wants to build a wall to keep out drugs and undesirables.  Most of the people to whom he panders agree that a wall is a great thing.  There is a glaringly obvious flaw in their plan, however. We spoke with Ernie Greber of the Michigan Militia, who informed us that Trump is clearly a plant by Hillary Clinton.  He presented evidence which was ‘irrefutable’ and ‘beyond reproach,’ which showed that Trump’s wall plan was not designed to keep illegals out but to keep Americans in.

Basically, we’re dealing with a Nazi here.  He’s just like a Stalin and a Kim (Il, not Un).  He wants that wall, and lots of us buy into it, but it’s startin’ to look more like a prison wall than a safety wall to me.  He’s like some kind of a Gorbachev, or Mobutu Sese Seko Nkuku Ngbendu Wa Za Banga or something… and maybe even big brother.

Amid the stacks of printed web pages and screen captures of PrisonPlanet.com videos, he showed us what look like scanned napkins supposedly drawn by Trump ([lightbox full=”https://immediatesafety.org/wpbk/wp-content/uploads/Trump-wall_1.jpg”]Napkin 1[/lightbox] – [lightbox full=”https://immediatesafety.org/wpbk/wp-content/uploads/Trump-wall_2.jpg”]Napkin 2[/lightbox]).  These napkins show a section of the wall and are clearly intended to convey the plan.  We can’t tell, but the one side of the wall has what appears to be the word ‘America’ and the other is pretty clearly ‘Mexico.’  What’s not clear is the direction of the barbed wire.  Ernie insists that it’s pointing so that Americans can’t get out.

I mean, it’s all there.  ‘Murkins are stuck on the one side, and the river is on the other.  That barbed wire is to keep us in, not them Mexicans out.  I guess Trump’s people want Hillary to win, and make it so that we can’t run to Mexico when the Obama people come for our guns.

We asked him how he came upon the images of the napkins, and his answer was that he had his sources.  He was confident they came from the Trump campaign.

Trump was mixing ‘with the people’ as politicians will do, kissin’ babies and eatin’ diner food and whatnot.  His waitress, a fine and patriotic woman, certainly in fear for her life, collected the napkins.

While we can’t be sure of the motives of any candidates, one thing is certain.  Napkins don’t lie.  As far as the wall, Trump’s people tell us he says the following.

This wall is gonna be great. It will be the greatest wall ever. You will be amazed when you see how great it is. Yes, it is napkins now but those are great napkins and the drawings are great. You just wait and see. Its gonna be great!