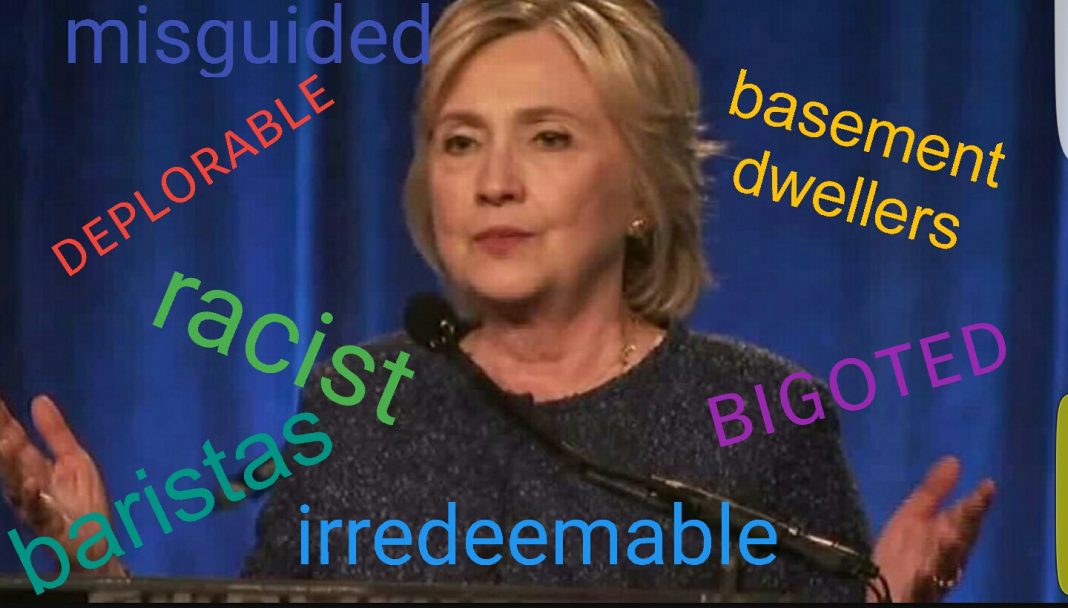 BALTIMORE, Maryland – By now we have all had the opportunity to hear Hillary Clinton’s infamous besmirchments of the irredeemable deplorables who support Donald Trump, and the basement dwelling, easily manipulated ’cause heads’ who supported (and still, support) Bernie Sanders. Many are still confused as to whom she was actually referring to when she orated her scripted, misinformed diatribes against the very citizens she purports to desire to lead over these next four years.

If we start with the Trump supporters we learn that she was attributing deplorable status to the “under educated” segment of our society. This is a phrase that has been thrown around by pundits and candidates this election cycle in an attempt to label Trump supporters that lack a college education. This is the elitist way of calling you ignorant and insufferable, But just who are these deplorable underlings made irredeemable by their lack of a university diploma? These are the truck drivers, welders, carpenters, bus drivers, auto mechanics, garbage men, store clerks, masons, soldiers, and so much more that not only built this nation but have paid for its survival through blood sweat and tears. These are the good, honest, hardworking people who have provided Hillary Clinton the opportunity to amass great wealth and success without ever having to dirty her own hands, or do any heavy lifting. The same people that created the environment for her fortunes are the ones she most sternly thumbs her nose at today. Words do hurt Madam Secretary but not nearly as much as condescension and disrespect.

Next, the bitter basement dwellers who are “cause-heads” because they followed Bernie Sanders, and still do I might add..  These are mainly millennials who bought into the belief that once they completed their university requirements they would be able to find a good paying job and live the American dream. Hillary mentioned baristas specifically as those who are so downtrodden that they could be easily manipulated into a political uprising like the one Senator Sanders created. It’s

true and it’s ugly. The federal government has long played a twisted coerce game of massive overpayments to lending institutions for student loans which allow universities to charge exceedingly higher costs for classes and books, while putting good students, without any real semblance of wealth, into the kind of crippling debt that they will likely never recover from. Are they angry? Of course, they are and should be. These same universities would never survive charging this kind of tuition without the federal government sticking their hands in where they don’t belong. So why are tuition rates and accumulated debt from said tuition rates so astronomically high? Because politicians like Hillary Clinton have gamed the system. How much of that increased tuition cost goes into donations to political candidates and charitable organizations like the Clinton foundation? These kids have been sold a poor bill of goods and the former Secretary has the audacity to then belittle them as if they had a choice in the matter.

For 30 years Secretary Clinton has had the opportunity and, dare I say, an obligation to use the power she was granted as First Lady, Senator, and Secretary of State to help forge environments that would have assisted the average American to achieve success through hard work, skill, and determination. Unfortunately, she spent that time looking out for herself, her political friends, political opportunists, and those who made sizable donations to her “charitable” efforts. If it wasn’t bad enough that her poor decision making as a leader and incompetence as an elected official has left a large angry mass of deplorable, irredeemable, basement dwellers without real hope she doubles down with a hateful dismissal of their political opinions and their ability to logically reason without the assistance of their elite overlords. Next time maybe Mrs. Clinton should be gracious enough to forgo the name calling and bitter resentment towards those who have seen through her corruption and lies and simply say thank you for putting up with her for the last 30 years.