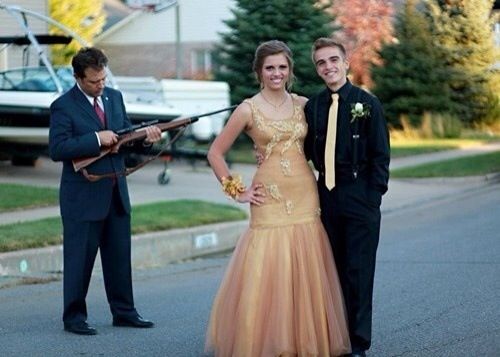 Teenagers date.  It’s a natural part of the process of growing up.  They also do all manner of things fathers don’t want to think about.  This fact has given rise to the DADD movement, among others.  DADD stands for Dads Against Daughters Dating.  This idea is generally limited to fathers of good looking daughters, but looks are a very subjective thing.

DADD is not an organized movement, as opposed to the MADD movement, which has meetings and a national headquarters.  It’s more of just a shirt that dads can wear to announce that they feel their daughter is good looking enough to warrant a defensive posture in regards to dating.

There are many methods and postures for fathers who find themselves in this predicament.  They range from purchasing and training large, vicious dogs of various breeds, such as pit bulls, German shepherds, rottweilers, mastiffs, Dobermans, etc. to large collections of guns in conjunction with martial arts training.  Whatever the method, the father in question chooses, the result is a danger to the would-be suitor for that particular father’s daughter.  The movement even has a violent motto, “Shoot the first one, and the word will spread,” or, “Put the first one in the ground and the rest won’t come around.”  The mottos are intended to intimidate young males, and weed out the arrogant ones.  Those who don’t take it seriously are considered ‘not worthy,’ while those who are intimidated are a safer bet.

We talked to a dad who started preparing early.  Walt C. from Georgia told us that he’s always had guns, but his plan involves a strong family ethic and relies heavily on his son.  His son is ‘huge’ and loves his sister.  His plan involves teaching his daughter self-defense, archery, and marksmanship.  Like many DADDs, he’s a military man with extensive training.  He has also decided to tell her the truth at a very young age.

I’ve said that she isn’t allowed to date until she’s married. Let her try to figure out the logistics on that one!  But I definitely have the Death Stare down pat.  If they aren’t scared of her brother, they will be scared of me.

His daughter is young.  What about those with older daughters?  We spoke to Pete J, whose daughter is 15.  He’s taking no prisoners.When asked how he does the job of keeping the bad guys at bay, he gave us this advice.

Tell him that that is your little girl you love more than this world. Tell him if he hurts her in any way you will fong him! Fong him until his insides are his outsides his entrails are his out-trails!! Pain!!! Lots of pain!! I am not afraid of prison!!!

The takeaway here is this.  If you’re a young man looking to date a young lady, your safest bet is the daughters of single mothers.  Involved fathers are not your friend.  You’re far less likely to get shot, mauled by a trained dog, castrated, or otherwise dismembered.  It’s in your best interest to have her home by 10PM and keep it in your pants otherwise.  Especially when it’s her idea.  Her dad is still going to kill you, because no matter whose idea it is, it was your idea to be late.

The Benefits of Cooking in DuPont™ Tyvek® Coveralls