Home Regulations Local Union : Fires are dangerous. Call us when it’s out. 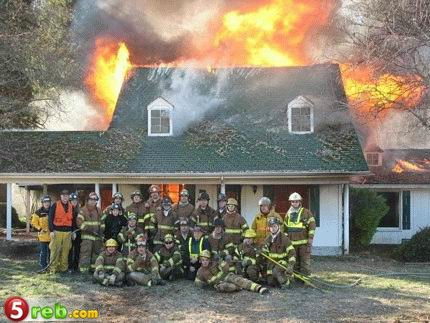 My house was burning down and the firefighters all just stood around doing nothing. I tried to get them to do something but they said their contract says fire is too hot to go near. – Sid Boyer (resident)

The firefighters were actually correct in their interpretation of the contract. Article 3 clause 2 subsections 4-7 make it unlawful for any union members to go inside a building with temperature readings above 120°F. The agreement also states that the union members cannot be within 50 yards of a property that has reached 150°F or greater. This distance exceeds the capability of their hoses. This has angered many in the community that these firefighters have sworn to protect.

Just so we are clear, the only people in Palo Alto not allowed to fight fires are firemen? Why do we have firemen then? My entire house burned to the ground while they watched from across the street. – Clancy Perez (resident)

One of the new guys grabbed a hose and tried to help us. The other firemen called the police and had him put in cuffs until the fire was out. They said it was for his safety. Who is protecting us? – Jerry Fry (resident)

Fire Cheif C.D. Bales has a different take on the controversy and has not been shy about speaking out, ” These fires basically burn themselves out anyway. All we do is get everything wet.” Bales went on to say, “Fires are dangerous and I am not crazy about putting my guys in harm’s way. Once we verify the fire is out my men will do their jobs”. According to Chief Bales that job consists of investigating the remnants of the fire.

Many communities and unions around the country are watching to see the results of this agreement. It is only a matter of time until other bargaining units adopt similar measures. The best advice we can give is to remain fire free.