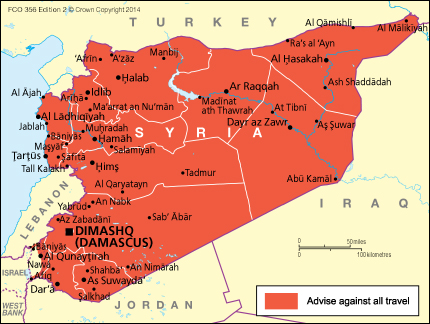 DAMASCUS Syria – War surrounds, war engulfs, and war reigns through the entire nation of Syria. Greatly outmatched by the Giant bear that is Russia, our Syrian neighbors have begun to get creative in their attempt to stave off their aggressors.  The greatest weapon on the front lines of the Syrian resistance appears to come from the most unlikely of places, a lowly zookeeper from a relatively unvisited state-run Zoo in Damascus, Dr. Muhammad Abdul, and his flocks of trained birds.

Dr. Abdul’s creation consists of thousands of trained foul fitted with special oxygen mask/combat helmets that rip through metal and bring planes to the ground upon impact. Codenamed project “Hitchcock” this group of flying bird soldiers are turning the tide of the war.

I was at 20,000 ft. There should not be birds at that altitude. They surrounded my plane, hundreds of bastard birds flying right at me. I fired my guns but the birdies kept coming.  I just shot randomly trying to hit them but they are so small. – Cpt Demitri Volkof, Russian Spf

Dr. Abdul has spoken out aggressively against the Russian occupation and touted his ability to stop the deep red line from extending into Damascus. With his flock at the ready, he is willing to battle until the end.  His fight is against what he considers to be the evilest of infidels bringing the war to his homeland.

When defending your country you must always remember that someday somebody’s gonna make you want to turn around and say goodbye. Until then are you gonna let them hold you down and make you cry. Don’t you know,  things can change things will go your way, if you hold on for one more day, things’ll go your way. -Dr. Abdul

Dr. Abdul is not planning on stopping at just warrior birds. He is in the process of training dogs, cats, rats, tigers, and earthworms to weaponize and join the fight.

God has provided this land to all of its creatures and we will defend it. We’ve paid our dues, time after time. We’ve done our sentence, but committed no crime. And bad mistakes,  we’ve made a few. We’ve had our share of sand kicked in our face, but we’ve come through. -Dr Abdul

War continues to rage on. There is no end in site but hope erupts from the fiery pits of downed jet fighters and feathered wings. May the Gods of war look highly on those who create from nothing to encourage those without to rage against those with all.