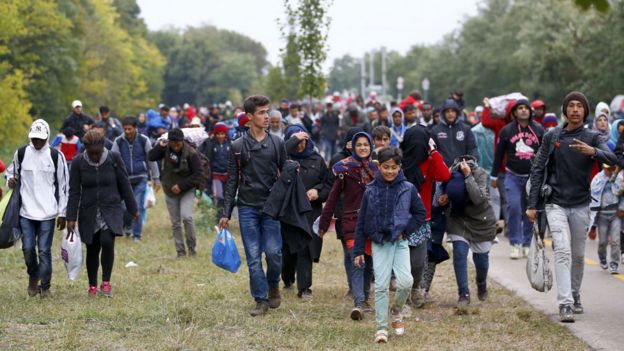 WASHINGTON D.C. – President Obama is taking no prisoners when it comes to the safety and well being of Syrian refugees seeking asylum in the US. He has been having a very difficult time convincing an emotionally charged Congress and citizens that these refugees are safe.

Nothing is more essential to our American way of life than lending a hand to those in need. Since the Republican lead Congress refuses to fund new homes for those downtrodden souls seeking refuge from the horrors of oppressive governments I would ask each of you to open your hearts and your homes to adopt a refugee today. – President Obama

The President’s plan calls for his supporters to host families seeking asylum from the repressive evil of Isis. They have used their campaign lists to reach out to these former Obama voters to show Independents and Republicans what compassion looks like. Thus far over 15 million robocalls have been made to Obama supporters and voters.

Thus far we have not received any calls back. We expect that all Obama voters and supporters will call soon. It has only been a week. We need to be patient. – Maria Bathers, White House Staffer.

We interviewed several people who received the Obama calls. Here is what they had to say.

I supported letting these people in until I was told some would be moving in with me. I just assumed someone else would be taking care of them. How am I supposed to know whether they are dangerous or not?  I don’t really have room or know their language or anything – Trevor Slate, voter

I agree they should be able to come here as I am a compassionate person. I just don’t necessarily want them living in my house. How am I supposed to sleep if I have to worry about getting… well… something, in the middle of the night. I still support them coming here just not really in my apartment. – Assunta Buchler, voter

The president understands how difficult it will be to force Americans to move refugees into their homes so he is working on a plan to answer calls himself as his supporters volunteer to be hosts to these refugees. He prefers volunteers but indicated he has other ways to get these refugees into homes if needed. We will watch with great anticipation as these events unfold.