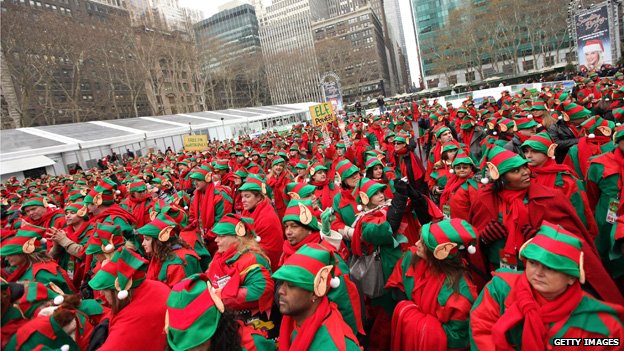 Every year during the holiday season, malls across the country drag the holiday decorations out of the storage dungeon and proudly display them in the main common area.  Along with all the decorations, come the north pole themed displays, the reindeer, and the lines of children waiting to see Santa.  With Santa invariably come his elves.  Children who believe aren’t aware that these elves are generally little people (and the occasional short, skinny girl).

Seasonal employees are generally considered expendable by their nature, but Santa’s helpers are a special case.  They’re similar to the temporary workers at shipping and logistics companies like UPS, FedEx, and the US Postal Service, only shorter and less likely to lift 50 lb packages.  They are important to the holiday season, and they wish to be treated as such.  In their bid for collective bargaining rights, Steve Paul of the Mall Elves & Santa’s Helpers Union (MESHU) spoke out.

We’ve had it up to…  we’re tired of being overlo… I mean, trivialized.  Without us, the holiday experience would come up sh…  it just wouldn’t be the same.  We take the kids to Santa, we handle the parents and the snotty noses, we put up with big privilege.

They have demands.  Among them are, better pay, better working conditions, more breaks, age limits for the children in the lines, the right to turn away obnoxious parents, and the ability to slap children who bite.

Naturally, when collective bargaining is concerned, there is always an ‘other side.’  In this case it’s the public relations people in charge of the malls.  We spoke to Maria Cousins, Special Events Coordinator for a group of mall companies in Minnesota, who had this to say.

I just love that they have demands.  They always look so happy when they walk, like they’re listening to ‘ding dong the witch is dead’ in their heads.  Don’t even get me started on how cute they are when they’re angry.  So precious…

She also commented on their protests, saying…

Oh, my god…  their protest signs are bigger than they are, and I just can’t even.  I wonder how they can do the marching, and the chanting in the wind without their little bodies just blowing away.  I just wanna eat ’em up.

Her bosses have taken a different view, however.

One of the sad realities in the business world is understanding the shortcomings the situation presents. We have a tiny budget to get us through that small chunk of the year we call the holiday season. We’ll hold onto a smidgen of hope that this year’s earnings will dwarf last year’s, enabling us to give our little friends a pinch of extra income. I am really fond of my lollipops kids, and we’re not above tossing around ideas.

Naturally, the MESHU representatives are not happy with the laissez-faire attitude of most management companies.  They demand to be taken seriously, but honestly…  Just look at them…  One more of the demands of the elves, separate lines for kids and parents.  The reason?

…when parents are in line with kids… well, we’re just at the wrong height to deal with big people.  We can always tell when they’re wearing two day old underwear.

War On Christmas Casualties Projected in the Thousands This Year