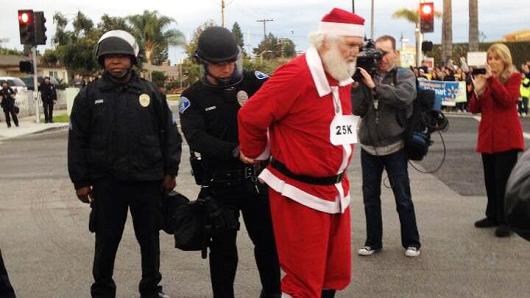 The ever-growing war on Christmas is projected to claim thousands of lives this year.  The US Department of Homeland Security is warning Christmas revelers to avoid major cities with significant atheist populations.  The more militant atheist factions, such as The Godless Heathens, The People’s Atheist Front of Austin, and Militant Atheist Liberation Front have vowed that Christmas this year would be a bloody reminder that not everyone is a Christian.

The first step is the red coffee cups at Starbucks.  The next step is booby trapping all of the nativity scenes in the greater Austin, TX area.  The AFA is through using the courts to do away with this holiday nonsense.  There will be blood.  I DRINK YOUR MILKSHAKE! –  Spokesperson for the Atheist Front of Austin

As the holiday gets closer, militant groups are likely to step up operations and increase sectarian violence.  DHS and the FBI are taking all threats concerning Christmas hostilities seriously.  This is the first year they expect the death toll to exceed 1,000.  As usual, if you see something, say something.  They remind you to stay vigilant, and not to advertise that you support the Christmas holiday.  You can report acts of Christmas violence to either the FBI or the DHS on their respective websites.

Stay safe this year, people.  This war doesn’t look like it will end anytime soon.