NEW YORK, New York – The National Football league has long been the champion of violence and conquest on the field of battle. Rules have been created to curb the blood thirst that causes 300-pound monsters to crash into each other at top speed, and make it a game that appeals to all members of the American family. Recently the NFL has found itself embroiled in something much different. Violence off the field is becoming a concern that could rock the NFL to its core and severely damage all of the marketing work it has done to increase viewership amongst women.

NFL commissioner Roger Goodell is firing back at these offenders in a big way. He has recently announced new punishments for domestic violators and it is sure to stop this violence in its tracks.

The NFL brand has always stood for excellence in the world of sports and we are not about to allow our reputation to be tarnished. Moving forward anyone convicted of a domestic violence crime against their wife will be hit immediately with a 15 yard penalty assessed to their team. We will not waiver and we will not compromise. The time for talk is over. It’s time for action.

Some tough words from a tough man.  The reactions have been mixed throughout the NFL world and of course, the NFLPA which is the union representing the players. They believe that a 15-yard penalty is too severe and have asked the NFL to reconsider its stance and move to a more suitable 10-yard penalty for first offenders.

The NFL is sending the wrong message here. Just because a man is convicted of hitting his spouse does not mean the suffering must continue. 15 extra yards is excessive when a man is trying to rebuild his life. -Dayla Hart spokesperson NFLPA

Many players have been vocal as well, and are showing solidarity against these new rules. One, in particular, is Devon Still who is an offensive lineman for the Buffalo Bills. The referee marked off his 15-yard penalty right after the opening kickoff of a game, starting his Bills teammates in a 1st and 25 hole.

It’s hard enough to get 10 yards in 3 plays let alone 25! Had we not hit that big pass play on 2nd down we may have had to punt. Why is the NFL doing this to me? -Devon Still 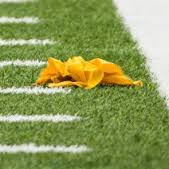 The Chicago Bears were hit the hardest last year as three domestic violence penalties were assessed in the same game. Luckily for the Bears, the NFL (after a plea deal with the three players) lowered each penalty to 6 yards for a total of 18 yards. Bears fans were not happy and did not understand the loss of yards.

This is garbage! Just because a player hits his wife does not mean the entire city should be punished. That penalty could have kept us from scoring on that opening drive.. -Kip Sworski, fan

No matter how you feel about these tough new rules, commissioner Goodell is looking to add even more harsh penalties for off the field crimes. These include a Gatorade ban for any player found guilty of vehicular homicide during a DUI, playing an entire quarter with no eye black for committing any felony that includes a firearm, and a 1-year suspension for testing positive for marijuana.

These are tough new rules and I will not waiver. It is time for our players to face the consequences for their actions and be held accountable. -Goodell

Only time will tell if these new rules will make the difference but according to one player, Jamal Hill of the Arizona Cardinals, it already has.

NFL players used to be respected in this country. Now we can’t even hit our wives without getting a flag and 15 yards marked against us. I should have played basketball.