Home Safety North Carolina: Screw it, You Can All Wear Diapers 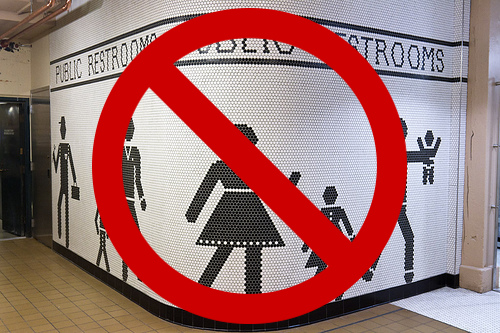 DURHAM, North Carolina – News out of North Carolina has been tumultuous over the last week, to say the least. Governor Pat McCrory (R) has had his hands full attempting to pacify a large segment of his state’s residents against the changing tides of inclusive laws and rights organizations setting their sights on the Tarheel state. According to reports inside his circle, big changes are coming in the way everyday citizens can live their lives.

He has had enough. He stood up and said screw it, everyone can wear diapers. We laughed for a minute but as we thought about it we realized it might be a great idea. – Anonymous staffer

A press conference has been announced for next Friday and media outlets are abuzz about the potential fallout of such a provocative change by the North Carolina statehouse.

We have been able to secure the first interview with a McCrory staffer who agreed to speak to us on conditions of anonymity.

IS – Are we seriously to believe that the McCrorey Regime might suggest residents wear diapers in lieu of using public restrooms?

Mr. X –  Honestly, it started as a joke and turned into something more. Once you get through the initial hilarity you realize this is safer, more inclusive, and job creating than public restrooms.

IS – So this is going to bring jobs into North Carolina making adult diapers and related accessories?

Mr. X –  Haha no, I said it would create jobs but never suggested they would be here. We are looking into some lucrative contracts with manufacturers in Mexico, China, and Honduras as we speak.

IS – Do you actually expect us to believe the citizens of North Carolina will agree to wear diapers instead of using public bathrooms?

Mr. X – This is North Carolina. We have a huge retirement community. I’ll bet 15% of our residents wear diapers already. The others will adapt.

IS – What about out of state people who vacation here or are just driving through? There is also mobile commerce using your highways daily. How are you going to convince truck drivers to wear diapers while traveling through?

Mr. X – If you want to vacation here you will either have to follow our regulations or don’t travel far from your hotel room. Truck drivers will still have access to truck stop restrooms as they can police these areas themselves if you know what I mean.

IS – Do you mean that they’ll be responsible for cleaning their own restrooms?

Mr. X –  Not at all. We will be making driver restrooms a use at your own risk facility. We will not be policing them so they are free to make their restroom experience whatever they want.

IS –  How will the state’s already strapped consumers afford the new expense of daily wear diapers and, we assume, wipes?  Will there be a stipend or a tax break?

Mr. X – We are going to allow adult diapers to be bought with food stamps. Also, some of our larger corporations will hand them out to their employees at no charge during the work day. It’s just another perk of living and working in North Carolina.

IS – How do you plan to keep men from just going behind a bush or using a tree?

Mr. X – We don’t plan to stop them. It’s good for the grass and will save them diaper money. I do this already.

IS – So you are going to make it legal for anyone to urinate anywhere they want in public?

Mr. X – Not sexist at all. We just don’t want women using our trees and bushes as a bathroom.

IS – But you will let men? Isn’t that the definition of sexist?

Mr. X – Are you kidding?  Have you ever seen a woman trying to pee outside?  It’s as sad as it is funny.  If god had intended for women to pee outside, he’d have given them penises.

IS – It looks, from your expression, that you just used your diaper.  You even got the little shiver at the end.  Is that what I just saw?

Mr. X – You know it.  It’s liberating to just go when you gotta.  Potty training takes that knowledge away, and North Carolina is giving it back.

IS – Thank you for your time.  Would you like to visit our restroom to change your diaper?