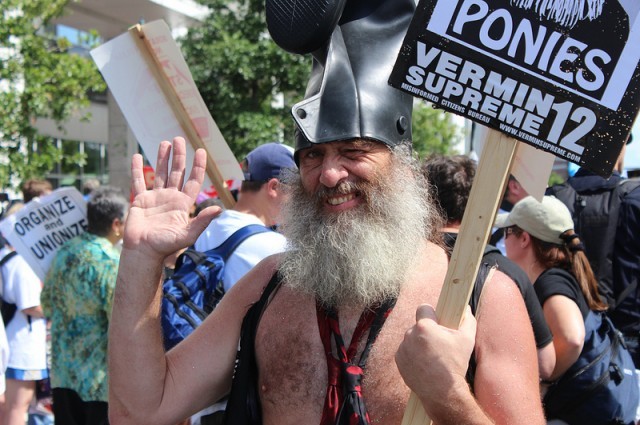 It’s no secret that we have enthusiastically endorsed the candidacy of Vermin Supreme.  We felt that his platform was the only one firmly rooted in reality.  While he didn’t win the election, we feel his message was heard and may play an important part in the discussion going forward.  This is evidenced by the number of pony protestors who were not hired by George Soros to incite violence and burn things.   Instead, they ventured out on their own to make only sensible demands.  If you’re still not familiar, read on. 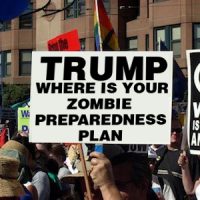 More people are becoming aware of zombies and the existential threat they pose.  Most presidents have no plan for dealing with this threat.  They tend to ignore the creeping specter of a zombie invasion in favor of other, less frightening, yet more popular, threats.  Still more threatening is US energy dependence.  Vermin Supreme has merged these two threats into one all-encompassing solution.  By harnessing the latest in giant hamster-wheel technology, the zombies can solve the energy crisis.  Why is this not in the public debate sphere?  It defies logic. 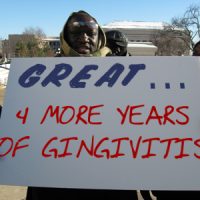 What about the dental health of the population?  A nation is only as strong as its gumline, and American gumlines are among the worst in the civilized world.  Is it really so bad to have mandatory tooth-brushing laws?  The fact that this issue is not often debated smacks of a grand conspiracy on the part of dentists and orthodontists.  They are, in fact, the only economic sector which stands to lose should this issue take the forefront of the public discourse.  We feel that they’re almost certainly behind the continued suppression of the message.

This brings us to the simple fact that among all the protesters, only those who support Vermin Supreme’s message of ponies, dental health, and zombie preparedness/ energy independence have been completely peaceful.  Perhaps the reason is that they know their candidate is the only one who can and will shatter the laws of time and physics to kill baby Hitler.  Other candidates don’t even take a position on this important issue, a fact which we find unconscionable.