Have you ever been so mad that your body heats up, your face turns red, and you start to shout? We have all been there and acted out as if there were no consequences. Oh, how wrong we all were as new studies from the prestigious Wellington Institute of Climate Change and Survival have suggested. In research conducted from June of 2013 through December 2014, Dr. Par T. Shill has shown that our angry outbursts not only endanger the lives of those around us but also all of humanity. Says Dr. Shill, “When our bodies heat up we raise our own temperature on average 10°C. Even worse our own anger tends to make those around us angry as well.” Dr. Shill continues, “Imagine if you will, one million people all angry at the same time, each adding a 10° shift to their immediate environment, and each affecting the moods of those around them. The planet could literally catch on fire if this kind of phenomenon is left unchecked.” 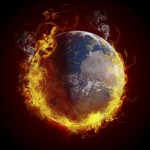 According to Dr. Shill’s research, it appears that anger may be a bigger contributor to global warming than fossil fuels, or even my SUV. When asked about this Dr. Shill insisted that anything used outside of moderation in the environment was equally responsible for our ultimate fiery death. When asked if that included his Range Rover he became angry and screamed profanities at our reporters.

Dr. Shill has backed legislation in Congress asking for an anger tax. The tax would be punitive and would be assessed to any American that either exhibits angry behavior or causes any other citizen to become angry. This legislation is fully supported by the President and is expected to be signed into law soon.

Dr. Shill is well known for his work on anthropogenic climate change over the years and has drawn links between global warming and aerosol bottles, hair dryers, SUVs, video games, and Cap’n Crunch© cereal. He is among the most respected scientists in the field today and is a New York Times bestseller with titles including, We Will All Burn, Melting Ice is Nature’s Gun, and the cult classic, My Breakfast Cereal is Destroying the Environment and the Roof of My Mouth.

NOAA Answers the Question: ‘Where Da Hoes At’ with Science