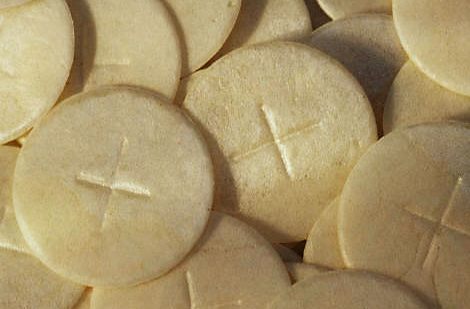 BRAINTREE, Massachusetts – The holy sacrament of the Eucharist is as much a part of the Catholic lifestyle as shaking hands during the Peace segment of Mass, but we’ve recently discovered that not all communion wafers are the same.  The vast majority of wafers used in churches and ministries throughout the US, Australia, Canada, Britain and now West Africa are made by a single company.  The Cavanagh Company in Greenville, RI manufactures full 80% of the communion wafers used in the above-listed countries.  They’re described as tasting more like bread than their competition, making them arguably the best-tasting Body of Christ available.  Recently, however, some less expensive newcomers have entered the market with varying results.

A Chinese company, PingZhi Holdings Company, offered the Archdiocese of Boston an offer they couldn’t refuse. In an effort to undercut the established leader in the altar bread market the archdiocese were offered their wafers at a discount of nearly 85%.  Father Patrick “Paddy” Fitzpatrick, a purchaser for the archdiocese spoke about the issue.

In a down economy with attendance lower than usual due to certain child related ‘difficulties,’ this deal was simply too good to pass up.  This archdiocese is one of the biggest in the world, and we go through a lot of the Body of Christ.  Enough to fill up a lot of crosses, if I may jab at humor.

In fact, the 2013 annual financial report shows that they spent $2.2 million on service-related expenses, a significant portion of which is wafers.  Cutting costs seems to have worked in the past several years as the archdiocese has shown a rise in assets and revenue as well as a decrease in expenditures.  Cost cutting is not without its drawbacks, however.  Unlike the fine wafers manufactured by the Cavanagh’s, which contain only wheat flour and water, the Chinese version has a long ingredient list.

We noticed that several parishioners didn’t like the taste of the new wafers, but that was mostly based on their facial expressions while crossing themselves.  Folks seldom speak negatively about the body of their savior.  Little did we know, the wafers we were giving them had a list of carcinogens as long as Jesus’ arm.

Essentially, for the past six years, the churches in the Boston area have been serving a cocktail of toxic chemicals mixed with wheat flour, and they didn’t even know it.  Everything from dioxin to depleted uranium, and a host of things even our science coordinator wasn’t sure he could pronounce.  The archdiocese has gone back to the tried and true Cavanagh wafers, but many fear the damage is done.

This whole time I thought the cancer was a curse from God for all the years I cheated on my wife and drank like a fish.  Guess it was just bad crackers. – Timothy McGill, parishioner

I think God should have warned Father Fitzpatrick instead of letting us eat those things.  Who knew the Body of Christ could be tainted.  I’m going to trust my taste buds from now on. – Mary Catherine Shaughnessy, parishioner

For the sake of the parishioners, we hope the doctrine of transubstantiation carries with it the removal of toxins.