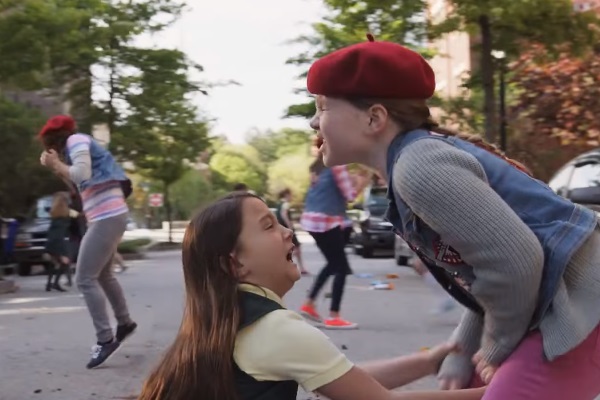 CHICAGO, Illinois – Chicago is notorious for its street gangs and the violence they bring, but when that violence spills over into normally peaceful areas of life the rest of the world takes notice.  Recently several troops of Girl Scouts have taken a page from the gang’s book of business and have begun escalating the cookie turf war to new heights of violence.

Everyone loves Girl Scout Cookies and as such, the first scout to find the prospective cookie buyer gets the sale.  As a result, the territory with the most prospective buyers is usually controlled by the toughest troops.  Troop 357, also known by the street name ‘The Gat,’ has historically controlled the wealthier section of downtown near the lake.  Recently, thanks to some up and coming, entrepreneurially minded smaller troops, the area has been challenged.  Troop 3371, also know as ‘tre-tre’ in the streets, has probed into the outskirts of the most lucrative markets.  The people with the money don’t care which troop gets the cash, so long as they get the cookies.

This kind of challenge has left The Gat with some tough choices.  We got a chance to sit with one of the older scouts, Millie Jiminez, to discuss their options.  Do they defend their turf, or allow the incursion in the name of peace?

This is Chicago.  Peace is for Indiana.

The ensuing brawl left 22 girls hospitalized, and countless cookies as a mess of crumbs.  One young lady was beaten to near death by another girl using only a box of trefoils.  Had it been Thin Mints or Samoas, this would have been an exponentially worse tragedy.  A young lady, whose parents wished her to remain anonymous, is facing facial reconstruction surgery due to another girl’s use of a Radio Flyer red wagon as a weapon.  Witnesses said that it resembled the first fight scene from Gangs of New York.

We hope these two troops can come to some kind of accord before more bloodshed, but that would require a dialogue.  The girls are in no mood to talk at present.