ARLINGTON, Virginia – During a surprise press conference this afternoon President Obama announced that he will award former Senator, and Secretary of State Hillary Clinton with the Bronze Star for her gallantry, heroic achievement, heroic service, meritorious achievement, and meritorious service in a combat zone. 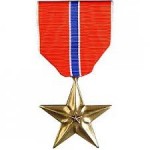 President Obama explained that the award has been earned based on her 40+ years fighting on various fronts including but not limited to; the War on Women, the War on Poverty, the War on Racism, the War on Capitalism, the War on Rich White Men, the War on Healthcare, the War Against Bill Clinton, waged by the Vast Right Wing Conspiracy and a handful of raped women who were actually asking for it, etc.

Secretary of State, John Kerry, was on hand for the announcement.

I can’t think of anyone alive more deserving of this award. Some people get it for burning villages and raping children. I am glad we have a recipient we can be proud of.

According to reports from inside the beltway, Secretary Clinton is wearing the scars of these battles and has even checked into her local V.A. clinic for assistance with her PTSD symptoms. She was taken in immediately and consulted for several hours.

We worked with Her (Clinton) until we learned the wounds were from “war.” Once we learned this we had no choice but to set a second appointment for 2018. – Dean Ambrose, V.A. Undersecretary of Unfortunate News.

The big news comes during a time when the Secretary is under investigation for several actions performed while in office. Many are already pointing to the timing as a possible attempt to assist Ms. Clinton in her efforts to seek the Democratic nomination for President. One of the detractors is Senator John McCain who obviously checked his progressive chops in at the door.

This is absurd. This is a slap in the face to anyone who ever wore the uniform.

On whichever side you find yourself, we all must agree that no one alive today has been through more wars and brandishes more scars than the former Secretary. Finally, Secretary Clinton will be rewarded for so many years on the front lines.

President Obama Ready to Announce his “Adopt a Refugee” Policy