It’s no secret that prostitution is a very old and storied profession.  In certain pagan cultures, priestesses of some deities earned money for the temples by participating in this profession.  US history, however, is replete with hatred of prostitution and vice (mainly from ugly church women).  Recent studies, however, suggest that prostitution may be the best way to stay safe and avoid costly permanent or semi-permanent entanglements with the opposite sex.

Most European, Asian, and South American countries allow prostitution in one form or another, and even one US state (arguably the best US state), Nevada, has decriminalized prostitution.  Given the tremendous evidence that it’s not harmful to society to let people sell what’s perfectly legal to give away, the University of Helsinki, in Helsinki, Finland, began a study of whore-related safety with a focus on expense over the long term.  What they found was as surprising as it was refreshing.

We spoke with Dr. Saku Ahola (that’s a real name, Google it) on the subject.  While he studies social issues worldwide, he specifically commented on the US.

A date in New York costs roughly $180, while a hooker costs an average of $100.  The worst part of the date is, you may need to repeat that process between 3 and 8 times on average before getting laid.  Not only that, but for the $100, you’ll get exactly the sort of depraved, insane sex you want without judgement.  When we do the math, spending $100 every time for precisely what you want, versus between $540 and $1440 for some vanilla, boring sex once seems insane. 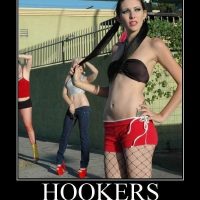 Boiling down the dating process to something financial may seem anti-romantic, but he went on to point out that for the same money as 3 dates, a man can hire an escort who will treat him like the world’s best girlfriend should, and still ‘nibble his scrotum at the end of the evening.’  He didn’t stop there.

Dating makes absolutely no financial sense, especially in a down economy.  Don’t even get me started on marriage.  Given the fact that 60% of marriages end in divorce, and raising children costs an average of $250,000 per child, hookers just make sound financial sense.  A man could have sex with two different whores per week for 10 years and never approach that kind of money.  In fact, that’s less than most single men pay for clothes in a year, and hookers don’t care how you’re dressed.

He has clearly put a tremendous amount of study into this subject, and he went on to point out logical inconsistencies with the dating/ courtship process.

Imagine this scenario.  You’re dating a woman, but you meet one you like better for whatever reason.  You decide to switch, and the first one destroys your car with a baseball bat, burns all your clothes, spraypaints ‘cheater’ on your garage door, and spends the next three years stalking you on Facebook.  We see that all the time in this research, and it makes no sense to get involved with it.

Not everyone agrees.  Women’s rights activists and feminists are outraged that anything so sexist could even be suggested.  We couldn’t include most of their comments, mainly because they were so full of expletives and vitriol that they scared us.  Suffice it to say, American women don’t take kindly to the idea that they may be replaceable.

Ohio Doctor: My Life Was Ruined by Billboard Company