EVERYNOOKANDCRANYIN, America – Sometimes, throughout our lives, we hear words that automatically trigger negative emotions; Hitler, Satan, Osama Bin Laden, Nickelback just to name a few. Do we ever get it wrong? Do we ever automatically supplant a negative connotation to something before we give it a chance to be OK?

That’s something we all need to ask ourselves as we work through the suggestion that Former President Barack Obama used the powers of the Oval Office to spy on both well-known antagonists around the world, and everyday normal folks simply living their lives.

As we look into some of the examples of the former Presidents “spying” we see that he simply has a big heart and a bigger mother complex. 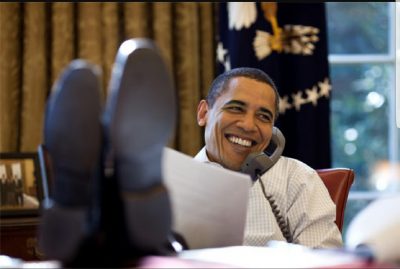 Jane Everett (Phoenix Arizona) was simply doing her grocery shopping when she first encountered “Obama Style” spying. “I was buying tuna fish and hadn’t given much thought to anything but price. That’s when my text alert went off. It was (former) President Obama”.

This is Barack. I just wanted to let you know the company who makes the tunafish you just grabbed catches dolphins in their nets. I’m sure you just forgot and needed a reminder. I love that scarf. It’s so you. Where did you get it?

How about Billy Avers (Los Angeles, California) who had a near miss with some less than kind comments towards an undocumented citizen in traffic. “This Chinese guy cut me off in traffic. We were two seconds away from being in a terrible accident. I yelled “you stupid blind” and then a voice came through my connected car,

Hey..Hey no way Billy. This is Barack. I can’t believe you almost said it. Look, you need to calm down and check your privilege… and your tail lights. You have had one out for about a week. Preventive maintenance, Billy.

Saving people from poor shopping decisions and racial slurs are not the only ways in which the former President uses his spying for the right reasons as Sandy Heck (Sandusky, Ohio) can attest. “I was running late and didn’t have time to cook dinner. I pulled into a drive-through to get a sandwich and got shamed into a better decision.”

Sandy, this is Barack. You know fast food goes right to your hips right? I am starting to get concerned. Your last cholesterol screening suggests you might want to order a salad. I also saw Jimmy made honor roll again. Great job mom! Get the kid a decent haircut.

The former President seems to be popping up whenever people need him. Skylar Downs (Boston, Massachusetts) barely escaped tragedy while at the club and thanked the former President for spying (caring enough to always be there). “I was at the club doin’ my thang. Playah starts rubbin’ up on me and I wanted to get to know him better. That’s when Barack hit me up wid some good advice”.

Girl, he’s no good for you. You’re a ten and he’s a zero. His hair. His shoes, that shirt. He’s a Republican. Get out of there fast.

“Thank God Barack had my back. The thought of gettin’ wid a Republican, uggg”.