The news is all Hillary this, Trump that, Bernie the other (also Cruz, but who cares).  The worst thing about it is, every time you hear a politician speak, you know it’s a lie.  You know Sanders doesn’t know about economics because his proposals are insanely expensive.  Trump may (allegedly) know how to run a company, but does that necessarily mean he knows how to run a country?  As for Hillary, shouldn’t she be in jail?  If I’d done 1/10th what she has admitted to, I sure would be.  Those are your choices, though.  Oh, and Cruz, who will line up all the gays and whip them with fire hoses until they stop being gay.

So who does that leave you?  That leaves you with only the lunatic visionary known as Vermin Supreme.  He’s batshit insane.  I don’t even know what batshit insane means.  I may even hate the phrase.  That doesn’t change the fact that he is absolutely batshit insane.  He’s running on a free ponies platform.  He wears a boot on his head and carries a large toothbrush.  He wants us all to be prepared for the inevitable zombie apocalypse and wants federal research dollars spent on time travel study.  Lunacy, right?  Or is it… 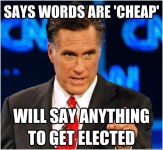 Most people know that presidential candidates will say anything they can to get elected.  Don’t believe me?  Watch anything said by Hillary Clinton or Mitt Romney.  Those two would say they supported the consumption of slow roasted babies dipped in honey-barbecue sauce if they thought it would give them a 2 point bump.  Every career politician operates on an election cycle, and once they win one, they start focusing on the next one.

Vermin Supreme, however, is just nuts.  He says insane things because they’re insane, not because they get him a poll bump.  In reality, though, they aren’t telling you what he actually thinks.  They’re just saying the stuff about ponies and time travel.  He actually thinks all government needs to be taken apart little by little to teach people how to stand on their own again.  He thinks that people are more important to the government than the government is to the people.  He thinks we’re all basically good, but when we get divided, we’re weaker.  Starting to sound less nuts, right?

The ponies and time travel are about getting the attention of the media, but I kinda still want a pony.  This reporter is voting Supreme.  It’s no more insane than voting for a known criminal, an avowed socialist, a psychotic evangelical, or a reality TV star whose most valuable possession is his name.